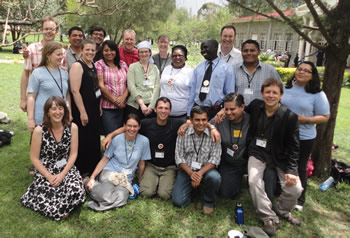 Quakerism is a religion and a way of life.
We more formally call ourselves The Religious Society of Friends.

In Europe and the Middle East, most Friends hold meetings for worship in the Liberal tradition, where they listen in silence for inspiration to give ministry. Friends try to live their lives to testimonies of truth, equality, peace and simplicity and have no creed or set of rules. This is more important to them than holding specific beliefs. Theologically, they represent a spread of witness in terms of Christianity, with some Friends and Meetings being more focussed on a traditional understanding of Christ’s role in humanity’s salvation and others taking a Universalist perspective. In recent years, new people have come into membership of the Religious Society of Friends without any Christian background – or from other religious traditions – and some find Christian language and references challenging.

Quakers emerged in England in 1652 and rapidly spread to the rest of Britain, Ireland and then North America. It now thrives in Latin America, many parts of Africa and around the world. Different worship styles and theologies have developed from these early beginnings. Outside Europe and the Middle East most Friends identify as Evangelical Christians, belonging to Friends Churches. They hold programmed services and employ Pastors. Other Quakers, usually called Conservative Friends, maintain the silent, unprogrammed tradition of worship, and also regard the Bible and Christian teachings as the bedrock of their faith. There are some Friends’ Evangelical Churches and Conservative Meetings in Europe. At present, they are not affiliated to EMES, but we can supply contact details for them to enquirers.

“Quaker” is really a nick-name for “The Religious Society of Friends”. So, Quakers are often called Friends.

Different styles of Quakerism have developed.

Of course, both styles have a strong sense of fellowship and community, and often engage in service projects together.

There are styles of Quakerism which blend these styles. In these times, the style most likely depends on where the Church/Meeting is situated in the world.

Quakers in the World
Page load link
Go to Top