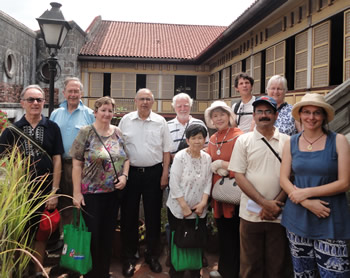 The purpose of the Friends World Committee for Consultation is to encourage fellowship among all the branches of the Religious Society of Friends.

The Quaker community circles the globe, spanning a rich diversity of regional cultures, beliefs and styles of worship. FWCC, through its four section offices, runs programmes in different regions, uniting Friends around the world through Spirit-led fellowship.

Our association with the Quaker United Nations Offices offers a means to monitor and present Quaker contributions to world affairs. Our consultation extends to those of other faiths through work with the World Council of Churches.

Answering God’s call to universal love, FWCC brings Friends of varying traditions and cultural experiences together in worship, communications, and consultation, to express our common heritage and our Quaker message to the world. (approved 2006)

For nearly 300 years Friends were held together within and between countries by the tenuous threads of letters and of Friends travelling, often in tough conditions, to visit and to inspire. Conflict within Friends in the 19th century led to splits and ruptures, resulting in the different strands of Quaker faith and organisation which we have today.

By the early 20th century many Friends regretted the divisions, and one attempt to build bridges was a World Conference in 1920. By the late 1930s it had become clear that the horror of World War I, and the subsequent founding of the League of Nations (warmly supported by many Friends) had not led to a unified or peaceful world. How could Friends in their various Yearly Meetings and grouping speak and act together? In 1937 a World Conference set up a ‘Consultative Committee’, which met for the first time in Denmark in 1938. It was formed of representatives of Yearly Meetings, at that time mostly from North Atlantic countries. The term ‘consultative’ was deliberate; FWCC has no control or authority over its affiliated Yearly Meetings and smaller groups, but is here to promote loving friendship and understanding, and to enable Friends to speak and work together, living our testimonies.

Since its founding FWCC has grown and changed. Yearly Meetings have evolved in the former mission fields of Africa, Latin America and Asia, alongside political decolonisation. FWCC has recognised wider participation by developing four Sections – Africa, Americas, Asia West Pacific and Europe & Middle East. Each Section has its own structure, activities and characteristics.

FWCC’s work is summed up as ‘Connecting Friends, Crossing Cultures, Changing Lives’. Much happens within the Sections. The worldwide body, working through the tiny World Office, enables consultation through meetings, various electronic communication, the website and the newsletter.

FWCC is the parent body for the Quaker Office at the United Nations – www.quno.org – an there have been offices in New York and Geneva since 1948. As a ‘Christian World Communion’ FWCC has associate membership of the World Council of Churches, and is represented at regular meetings of the Secretaries of Christian World Communions. Through FWCC we have a Quaker voice at world level.

As the world changes, we are called to seek new leadings for our global body. Quakers are growing mainly in developing countries, in Africa, Latin America, Asia. An organisation which evolved in Western culture now has the opportunity to become truly worldwide. Climate change, creating new pressures, conflicts and needs, is leading to a different world, in which the need for peacebuilding and conflict prevention, for understanding and friendly relations between peoples, faiths and cultures, and for global economic, social and environmental justice, is more and more urgent.

The world office is based at Friends House in London, England.  It serves four main roles:
Page load link
Go to Top